My Daily Encounter With Orion

Programming is happening mostly at nights, at least for my case, because this guarantees silence and concentration. I barely can stand 2-3 hours of constant typing (unless I am really absorbed) and so I am frequently making some quick breaks by hanging around my balcony to get some good, fresh air.

I have the great privilege to be able to watch a big deal of the sky, since my house is not located at the center but in a quiet semi-suburban area near the sea, but never actually bothered to know more about the things I was gazing at. This is when I decided to set up Stellarium on my computer. 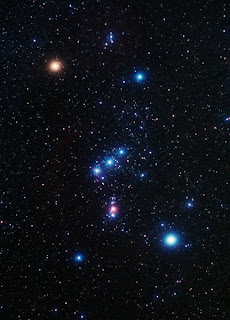 The first lesson was about the big bright triangle that I was seeing more and more often lately. It's base has three stars and it turns out it is the most known constellation on Earth. It is the Orion constellation (photo). If I was less ignorant, I'd know the basics, i.e. that Orion is visible to almost all of the Earth and in Greece it moves from East to West during the winter nights.

Wikipedia states it is the longest observable constellation, since it was formed 1.5 M years ago and it will last for the next 1M-2M years, thus having a great bond with human civilization. Orion is to be found on all cultures. In Ancient Greece, Orion was a Hunter who questioned Gods' power on Earth. Near Orion, on can find many other sky landmarks, such as Sirius on the east, the brightest star of the sky, the Taurus on the West and the Pleiades, the little 7 stars who look a little cloudy, which are next to it. Ancient imagination sometimes linked these stars together by picturing a fight of Orion with Taurus or sometimes Orion chasing the Pleiades.

Once an overwhelming experience that excited the imagination, then a great navigation tool, the stars seem to have lost their impact on human civilization (well at least the sky stars). Astromoners have computed their behaviour to the final digit to begin with.

However this is still a rewarding activity and altough I don't know if I ever forget anything that I have learned so far, since it is already a daily routine I will expect that at 4-5 am of every winter morning, Orion will be there pointing to the North, making some good company during my quick and cold homeworking breaks.
Posted by ElectricTheater at 4:08 PM