The quote continues: "Space is what prevents everything from happening to me!"
John Wheeler, has for a long time, been studying advanced concepts of theoretical physics, which for the most people are somewhat taken for granted, space,time, gravity and so on. He passed away in Sunday, 13th of April 2008, at the age of 97. 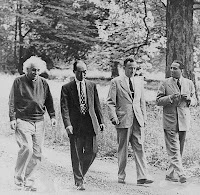 s. He has worked with legendary figures such as Niels Bohr, Oppenheimer and Albert Einstein(related photo) and he is the inventor of the popular term 'black hole', this strange 'creature' that is so big that even its own image cannot evade from its infinite gravity (visible light cannot reflect or be emitted) At some point in 1941 Wheeler joined the famous (or infamous) Manhattan project. Among his graduate students as a professor in Princeton, were Richard Feynman and Kip Thorne.

I suppose, everybody from a CS background has developed at some stage of his life a certain interest for astronomy and physics. I, my self, at a young age was a fan of such fields along with science fiction. I never actually understood what was going on with these strange quantum equations but I think I find my self equally astonished when confronted with concepts like 'black holes' or 'time bending'. Astonished at least.

You can find lots more information in the official press release from the Princeton University site.
Posted by ElectricTheater at 7:02 AM